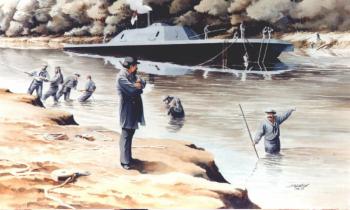 The Story of the CSS Neuse

CSS Neuse was a steam-powered ironclad ram of the Confederate States Navy that served in the latter part the American Civil War and was eventually scuttled to avoid capture by rapidly advancing Union Army forces. In the early 1960s, she produced approximately 15,000 artifacts from her raised lower hull, the largest number ever found on a recovered Confederate vessel

The contract for the construction of the Neuse was signed on October 17, 1862. According to the terms Howard and Ellis were to build the hull of an ironclad gunboat, and deliver it ready for machinery by March 1863. The contractors were to armor the vessel with iron and bolts (or spikes) to be provided by the Navy Department. The contracted price was $40,000 to be paid in several installments.

Less than two months into their work the builders suffered a major setback when Union General John G. Foster conducted a raid from New Bern inland to Goldsboro in December 1862. As the Union forces, advanced inland there was heavy fighting at Whitehall. The uncompleted hull was struck numerous times by artillery and small arms fire, and one Union soldier unsuccessfully tried to swim the river and burn the ship. The vessel was still on the stocks when the contracted completion date passed.

The exact date was not recorded of the launch of the Neuse, so one can only speculate upon when it occurred. Letters from late 1863 relating to the ship’s construction suggest that the vessel was launched in late summer of that year. Whenever it took place, the launching of the ship was premature. Flag Officer William Lynch in Wilmington, who was responsible for the completion of ironclads in the state, ordered the Neuse to be launched before her propellers had been put in. Ordinarily, a ship’s shafts and propellers were installed before launching because, obviously, that work was much easier to do with the ship on dry land. Later a cofferdam was built around the ship downriver in order to install the shafts and propellers.

After being floated and polled (or towed) to Kinston she was moored at the current site of the King Street bridge for completion (This location was a deep port called the “cat hole”). Finishing the vessel was slow. The South was short of iron, and poor railroads delayed shipment of armor. At one point in late winter of 1863, three weeks passed without any armor arriving in Kinston. A serious labor dispute in early April 1864 caused a few of the workers to go on strike, delaying the work further. However, the vessel was operational by late April 1864.

She steamed out of Kinston on April 22, 1864 to take part in General Robert F. Hoke’s attack on New Bern. Unfortunately, the river was unusually low, and she ran aground after only one-half mile. The river was falling fast, and soon the bow was well out of the water. Confederate forces in the area tried unsuccessfully to float the ship using camels (large pontoons). They also tried in vain to create an artificial river rise by building a dam across the river below the ship. The ship remained stuck fast until the river rose in May 19, 1864.

By the time the ship was freed most of the Confederate infantry in the area had been called to duty in Virginia. Thereafter, even when the river was high enough, there was never enough troop support available for an attack on New Bern. The Neuse remained idle at her mooring until March 1865. However, this doesn’t mean that the Neuse didn’t have an effect on the war. Just by being complete and sitting in Kinston ready to go if the opportunity presented itself was a twofold threat to the Union. It made them wary of venturing inland along the Neuse River again on another raid. It also made them fearful of removing too many troops from New Bern and not being able to defend against the Neuse.

In early March 1865 General William Sherman entered the state from the south and advanced towards Goldsboro. General Jacob D. Cox was also advancing to Goldsboro from New Bern. Confederate resistance to Cox’s advance, under command of General Braxton Bragg, was massed at Wyse Fork, east of Kinston. After heavy fighting on March 8th-10th, Bragg retreated towards Goldsboro, evacuating Kinston on March 11th. Orders were given to Commander Joseph Price to use the Neuse as rearguard, to cover the retreat of the army. On the 11th of March, as Federal cavalry reconnoitered the town, Commander Joseph Price ordered the crew to fire upon the Federals to keep them out of town. Later in the day the ship was scuttled, by setting it on fire and cutting it adrift. As it burned an explosion in the port bow sank the ironclad. Three days later the Union army occupied Kinston.

The modern recovery of the ship is covered very well in CSS Neuse: A Question of Iron and Time. That was not the first salvaging of the vessel though. The first salvaging occurred just days after the ship sank when soldiers from the 15th Connecticut infantry recovered some Colt side arms from the wreck. After the war ended the CSS Neuse was auctioned off by the United States Government to Satterlee, Lyon and Company from New York in October 1865. The machinery and armor plating were auctioned off local to the wreckage. The cannons were recovered and taken over by the United States Government, we have yet to track down just what has happened to them.

We do know that the boiler and engines from the ship were used to power a local sawmill. According to Federal Census records the mill in which the machinery was used was operating by 1870. Apparently, the mill changed hands twice, first passing from Joseph White to Jacob Parrott by 1879. The mill was operated later by Milton O’Berry before being torn down in the 1930’s. No information has been found suggesting whether the machinery remained in the mill until it was torn down, or if it did, what became of it after the closing of the mill. The hull of the vessel remained in the river until its recovery in the early 1960’s.

Visit the CSS Neuse Interpretive Center to get up close and personal with the remains of the CSS Neuse and a number of recovered artifacts.

More about the CSS Neuse